An honest consideration of truly student-driven learning should be uncomfortable. Great teachers are thus, not because they are profoundly accomplished in their respective fields, but because they understand and care about students and in such an understanding, must hesitate at the suggestion of bestowing greater flexibility and independence.

This is not a matter to be considered lightly because the consequences can be catastrophic. But so too can the implications be profound. 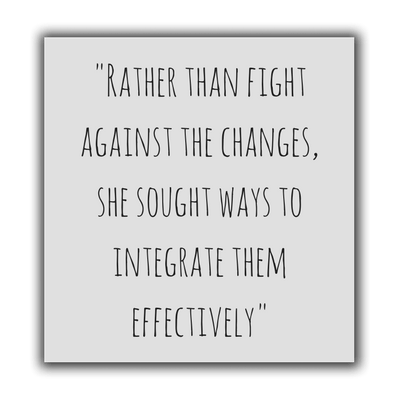 Then her district gave every student a device.

Mrs. Rutherford neither needed nor wanted the technology. She was not opposed to trying new things; she was not cynical of change or new initiatives. She simply did not need it, and in candid conversations, she sometimes expressed she did not trust it. The digital world of unfettered internet access was too dangerous.

However, like so many successful veteran teachers whose districts have rolled out technology initiatives, Mrs. Rutherford was expected to change, and because Mrs. Rutherford was an excellent teacher who recognized the value of trying new things, she did. Slowly, carefully, and arduously.

Here is what she learned.

Mrs. Rutherford found that the illusion of omniscience and omnipotence crumbled rapidly beneath the vast indiscrimination of the internet. Moreover, she was herself uninterested in mastering the nuances of such digital dynamics as “save” vs. “share.”

To her delight, though, a fair number of her students were interested in such nuances and in fact, often already possessed the savvy and smarts to address the needs that arose. Therefore, Mrs. Rutherford encouraged students to support one another and even consulted with them from time to time both to address her own questions and to speak into her activity plans. After all, the students often had a far broader grasp of the potential uses of technology.

Like in all areas of life, Mrs. Rutherford found that when technology became readily accessible in her classroom, things began to change with or without her blessing. Rather than fight against the changes, she sought ways to integrate them effectively.

At first, the changes were not particularly monumental or dramatic, like digitizing resources and simplifying feedback, but each small change presented opportunity for additional, more impactful changes. The key for Mrs. Rutherford was listening to her students open-mindedly and sincerely. Open and honest dialogue between teacher and students about what and how learning happened produced a kind of respectful and innovative culture never before seen in Mrs. Rutherford’s 5th grade classroom.

3) Give them space to soar

Despite the changes and innovations taking place in her classroom, Mrs. Rutherford still struggled with the desire to dictate to students what and how they should work. On the tip of the teacher’s pen, the tale of transformation stalled, for every time she lifted the pen, progress ceased. Furthermore, to her constant frustration, Mrs. Rutherford found herself repeatedly redirecting and reigning in students who sought to escape her restrictions.

This was nothing new, of course. But Mrs. Rutherford felt ill-equipped to impose her restrictions, both because of her own competency and her lack of access to resources that might support such efforts. Finally, the solution came in an honest, fifth-grade-sized insight.

“Why can’t I just do it a different way?”

When no defensible answer came, Mrs. Rutherford spoke the only words left to her.

That simple question, multiplied dozens of times over and delivered in every possible context, single-handedly, and in many ways literally opened Mrs. Rutherford’s door to transformation. Roles shifted, outcomes exploded, and innovation abounded.

What did Mrs. Rutherford do now that her students were learning at the pace of innovation and the depth of transformation? Very nearly the same thing she had been doing for decades, but scaled, packaged, and delivered with a degree of individualization and intentionality she never would have imagined. While students explored topics, created products, and demonstrated understanding, Mrs. Rutherford collected various forms of formative data, intervened with instruction and guidance when needed, and offered formal and informal feedback.

And still, her students entered her classroom in September a hapless rabble and exited in June a disciplined regime. And still, teachers praised her for her students’ level of preparedness. But the nature and extent of the discipline and preparation her students experienced during Mrs. Rutherford’s 5th grade class far transcended the needs of 6th grade.

Like these ideas? To learn classroom engagement strategies that make the most immediate impact, we recommend checking out our program, "Fostering Student Engagement."

Join as a Vendor

Our ElevateEDU newsletter is a treasure trove of free resources for teachers including instructional strategies, classroom engagement ideas, psychology of education research, and much more…

Have you heard about our new micro learning program?

Practical strategies in only 10-15 minutes per week

Easy to apply immediately to your classroom

Program cost is fully tax deductible as a qualified expense

May count towards CEUs – check with your administration

"I have been a teacher a long time. I wondered if the information in these lessons would be repetitive for me. That hasn't been the case. I know other teachers will appreciate strategies like these… small tweaks that can have a major impact in the classroom."

Subscribe to our emails for educators, and we’ll send you a free copy of six strategies you can put into place today to increase student engagement.

“A Blueprint for Better Staff Meetings”

Subscribe to our emails for education leaders, and we’ll send you a free copy of “A Blueprint for Better Staff Meetings” you can put into place today to increase staff meeting productivity and positive culture.

GET IN TOUCH WITH A COACH

Not a coaching client yet?

SEND US A MESSAGE

We are experts in Technology Planning, Design, Implementation and Professional Development for school districts. Contact us today to discuss your project.

Have you explored our services?

See how we can help

Subscribe to our emails for educators, and we’ll send you a free copy of six strategies you can put into place today to increase student engagement.
Shopping cart
There are no products in the cart!
Continue shopping
0